Standing Up to be Funny

Starting out in stand-up comedy is hard, there are plenty of pitfalls and the best comedians will tell you they have fallen into every single one. Material not landing, getting heckled, forgetting your next joke… All these ‘what-ifs’ soon become ‘remember-whens’ as your confidence grows and you build a comedy career. Yet the one thing you don’t need to deal with in the quest to become a better comedian is straight up abuse.

It is a popular excuse when someone is called out for poor behaviour to claim the offended party simply needs to toughen up. In comedy a thick skin is seen as vital, and yeah a certain amount of resilience is necessary, but what this constitutes currently seems to vary wildly. In a time where we’re getting to grips with trigger warnings, PC culture and wider terminology for various identities people are bound to slip up.

However, there’s slipping up and there’s leaning on hack material that’s plain offensive and thinking your audience should eat it up and call it edgy. Not only is it outdated but it doesn’t make for a creative, inclusive or safe space, which everybody is entitled to.

To be clear, a safe comedy space is not a place where every ‘snowflake’ has won and all must have prizes. It’s a place where a stand-up is safe in the knowledge that while their jokes might not land or they may freeze up on stage, they can rest assured they aren’t going to be introduced by the MC with a sexist remark or follow a comedian who won applause with an ableist joke or be propositioned by someone who, ultimately, is either their co-worker or employer.

So who should preside over this safe comedy space? Why, the promoter of course.

This doesn’t always seem to be the case sadly. A new comedian shared a recent incident of sexism with a promoter that inspired this article.  This is what she told us in her own words:

“When I performed a five-minute slot earlier this month, I was aware the promoter had been outspoken about his misgivings on the #MeToo movement… So I didn’t expect the red carpet to be rolled out, but I certainly didn’t expect what I got.

“I subsequently received a torrent of emails from the promoter asserting that this was a free speech issue and that I was being a shallow, thin-skinned little girl by objecting to these ‘jokes’ and should have stayed to listen to the men’s sets in the same way they so patiently talked through my own.

“At a time when nearly half a million adults are sexually assaulted in England and Wales each year, one in five women aged 16 – 59 have experienced some form of sexual violence since the age of 16 and only around 15% of those who experience sexual violence choose to report to the police, I question his label of me as ‘delicate and easily offended’ at a joke centred upon sexual assault and gagging.”

We had heard of other stories along these lines, so we asked the Funny Women community to share their experiences of hostile promoters and boy, did they have a lot to get off their chests. We received stories that ranged from attempts at public humiliation to harassment to sexual assault. Yet these women continue to gig, to write new material and, most importantly, they are calling out this abusive behaviour.

This ex-promoter made it painfully clear it wasn’t this woman’s talent he was interested in:

“I had a guy tell me at a gig that he used to be a promoter, and that he had discovered a comedian who is now very famous. He gave me his card and said he could get me spots in clubs… Later I saw him talking to a male act, he told me that he was telling the male act the same things as he had told me ‘and I don’t even want to put my things in his holes’.”

This comedian explained why women sometimes find it hard to stand up for themselves on the circuit.

“An older male promoter often runs women-only nights and makes a big deal about being anti-bullying anti-misogyny etc. He clearly gets off on the glory of running women-only nights and being held up as some sort of leader of women’s liberation, but he is in actual fact a bully. Just outright awful – not just to women – but this then has an impact on women because we are so often socialised to shut up when men speak or when we’re entering into a male-dominated space we find it harder to tell people in an apparent position of power to get lost, because we fear our opportunities to do the thing we love will be taken away.”

It seems there are some promoters who appear to exploit new acts:

“There is a popular bringer night where the hosts seemingly pick any new or vulnerable women from the list of comedians performing and their friends. It’s a particularly well-known fact that new young female comedians will inevitably sleep with one or both of them and be manipulated to feel that they are doing something wrong. It isolates you because who would believe anything you said? You’re new and you don’t know that actually, everyone thinks these guys are dirtbags.”

“A male comedian was organising his own gong show and had asked if I wanted to take part. Despite having doubts I decided to attend… Instead of having the usual cards that the audience member would hold up, they were given large toy bananas instead. This comedian chose his mum and best friend to have one of the toy bananas…

“Before I went on stage this promoter’s best friend came up to and said jokingly that he would gong me off. I said ‘you haven’t seen my set so why would you?’ He responded: ‘I’m going to shove this up you’ holding the toy banana up then followed that by saying ‘but I don’t mean this’ referring to the banana and thrust his pelvis forward. He then tried to shove the banana into my mouth.

“I emailed the male comedian stating what his friend had done and that I felt set-up so to speak by him. This comedian came back at me admitting his friend was out of order, but I should be more grateful because he had got me open mic gigs.”

There are hundreds more stories likes these and worse. What can we do to counter them? Plenty, we welcome you all to participate in the Funny Women community where we hold our Time of the Month nights in Ireland and London where women (cis and self-id) can come to talk about their craft with industry people and their peers before performing in front of a live audience. In Brighton, we have our monthly all women showcase at the Komedia and there is a growing community of fantastic promoters and comedians who are standing up to bullying and abuse on the circuit.

There are masses of talented, clever funny women out there, more than you can imagine. We had nearly 1,000 registrations for our last Funny Women Awards proving that the space and support we provide is hugely valid. It really is #TimesUp on sexism in comedy. Please call out lack of representation on comedy bills, vote with your feet and we can continue to work towards better and more inclusive comedy.

If you have something you want to say about this please comment on Twitter @funnywomen or email us to info@funnywomen.com.

Lolly Adefope to star in US TV Series

Comedian and actor Lolly Adefope has scored a role in a new American TV series based on the essay anthology compiled by Scarlett Curtis, Feminists Don’t Wear Pink (and Other Lies).

When you see One Woman Show — and you will — you’ll want to talk about it to everyone who’ll listen. You’ll want to see it again, maybe twice, and then organise some sort of One Woman Show book club event where you sit around in a circle and list all the funniest and cleverest parts.

Bronwyn Sweeney impressed the judges at the 2021 Funny Women Awards Grand Final with her high energy performance and inside secrets about working in advertising! We caught up with Bronwyn to talk about what inspires her comedy and the strange situation where she discovered she was funny… 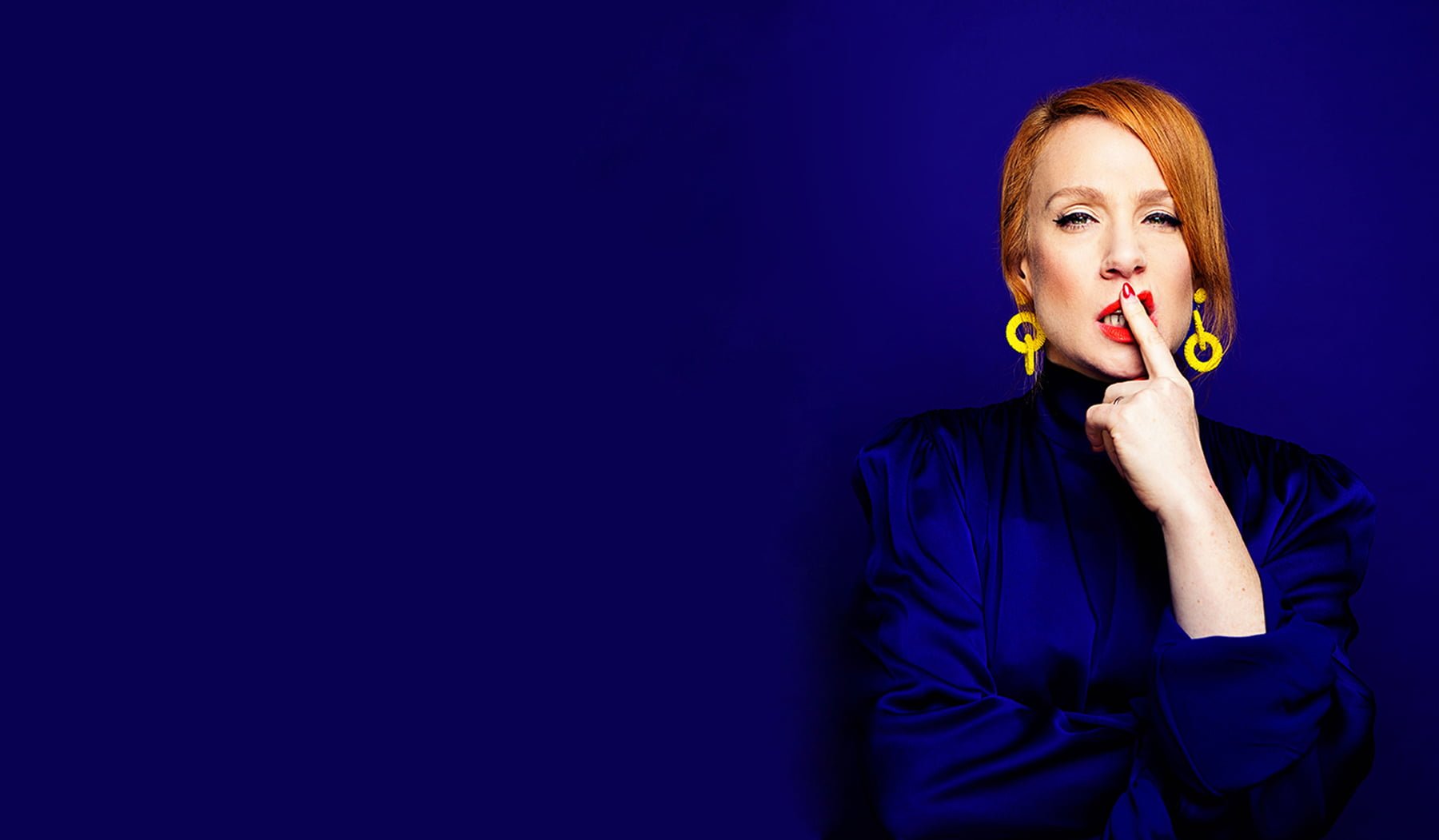 It’s perhaps bad form to start a review by commenting on what the comic is wearing but I reckon, in saying that I was slightly distracted for a minute by her incredible E.T. shirt, Sara Barron would think I am just being perceptive. (I need that shirt.)